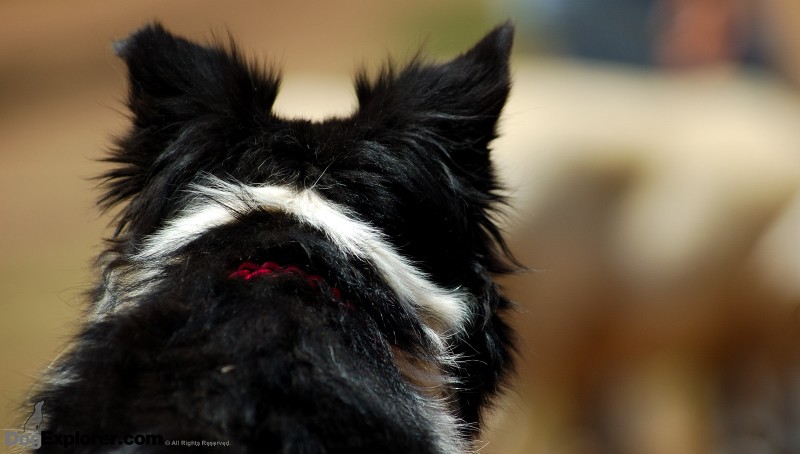 The theme was working dogs but the job at paw was dog rescue during the fundraiser held for Santa Barbara, California-based Dog Adoption Welfare Group, at a Carpinteria ranch on August 9, 2008.

The sun shone and music played as the event began at a beautiful hillside home with views of the Pacific Ocean. After the welcoming remarks and some relaxing conversation, the canine performances began.

The kick-off demonstration was impressive not simply as it was multi-dog and breed, it was also multi-species. SoCal Herding‘s Ted Thompson Ondrak provided an exciting look into the art and science of teaching the basics to herding dogs.

His cast included his own two black and white Border Collies, Drew and Bree, as well as four sheep he described as pets that live their entire lives with him. Additional assistance and variety were offered by the participation of Mark Dundon and his Bearded Collie Bubby.

Working from a large, uneven, dirt and scrub paddock at the bottom of a bowl-shaped enclosure, Ondrak showcased the herding dog instinct, ways to develop the softest touch on the herded livestock, and the nature of the relationship between handler, dog and flock.

He is an ideal person to demonstrate these topics as a licensed herding judge for the American Kennel Club (AKC) and regular herding dog instructor at his own classes and clinics. It is no surprise he was supporting DAWG and had done so in the past as he explained to the audience that his sheep are not sold off for slaughter. This brief photo essay only features a few of the photographs of Ondrak’s performance. See all the herding dog pictures in our photo gallery by clicking on any picture.

Next up the guests got to turn the tables on the Santa Barbara County Sheriff’s Department and investigate them. Well, one of their canine officers, that is.

Lafferty explained that Xalvo was trained with a toy reward instead of treats. He and the dog have been a team since 2004 and Xalvo has the ability to detect and alert to six types of narcotics. He can also locate suspects, lost persons and items that contain human scents.

Finally the guests migrated to an arena where they were treated to a demonstration that explained the fundamentals of the popular dog sport known as flyball. Giving the demonstration were the well known Santa Barbara Flyball team the Supersonics.

We hope you enjoy this photo essay from the Working Dog fundraiser for DAWG as much as we enjoy bringing it to you. It features 10 selections from the 44 dog pictures we uploaded to our dog picture gallery. Be sure to view the best here and then stop by the dog picture gallery for even more (just click on any of the pictures).

And if you can, don’t forget to do your part to support DAWG. Every little bit helps and they do a lot of good work.

If you have a picture you think worthy of our front page, please upload it to the correct album in our dog picture gallery and then send us a note through our contact page. These pictures can be anything dog related, from portraits at rest to action shots and funny moments.

It is also very important for you to please fill out our readership survey if you have not already done so. Please take a moment right now. Click here to fill out the survey.

And now, the rest of the photo essay from the Working Dog fundraiser for DAWG: